Changing the interchanges: How a Wayne State alumnus is making roads safer

With Americans logging more vehicle miles than ever before, transportation engineers are reimagining interchange design on U.S. roadways. Most of the traditional configurations were built more than 60 years ago at a time when traffic volumes were much lower and driving customs were different. Motorists in the U.S. drove 3.21 trillion miles in 2018, an increase of nearly 350% compared to 1960.

This growth in traffic, coupled with the fact that more than half of all crashes resulting in injury or death occur at or near an intersection, precipitates the need for alternatives such as diverging diamond interchanges (DDIs), a design that eliminates the conflict between left turns and opposing traffic, thereby maintaining traffic flow.

Amir M. Molan, a postdoctoral researcher at the University of Wyoming who earned his Ph.D. from Wayne State University in 2017, is committed to analyzing intersection safety and serviceability while developing new designs to improve transportation infrastructure.

One of Molan's doctoral research papers - written in collaboration with Joseph E. Hummer, a former professor of civil and environmental engineering at Wayne State currently serving as an administrator for the North Carolina Department of Transportation - was selected as the best paper of 2018 by the ASCE Journal of Transportation Engineering. Molan received the award on June 11, 2019, during the ASCE International Conference on Transportation and Development in Virginia.

For this project, Molan and Hummer evaluated the traffic performance of two new service interchanges to determine if they were appropriate substitutes for four existing designs. They ran simulations on a synchronized design, a variation of the superstreet intersection which itself is a variation of the "Michigan left," and an adaptation of a recently constructed interchange in Milwaukee - dubbed the "Milwaukee B" in this study - that bears similarity to a parclo B design, a popular freeway-to-arterial layout. 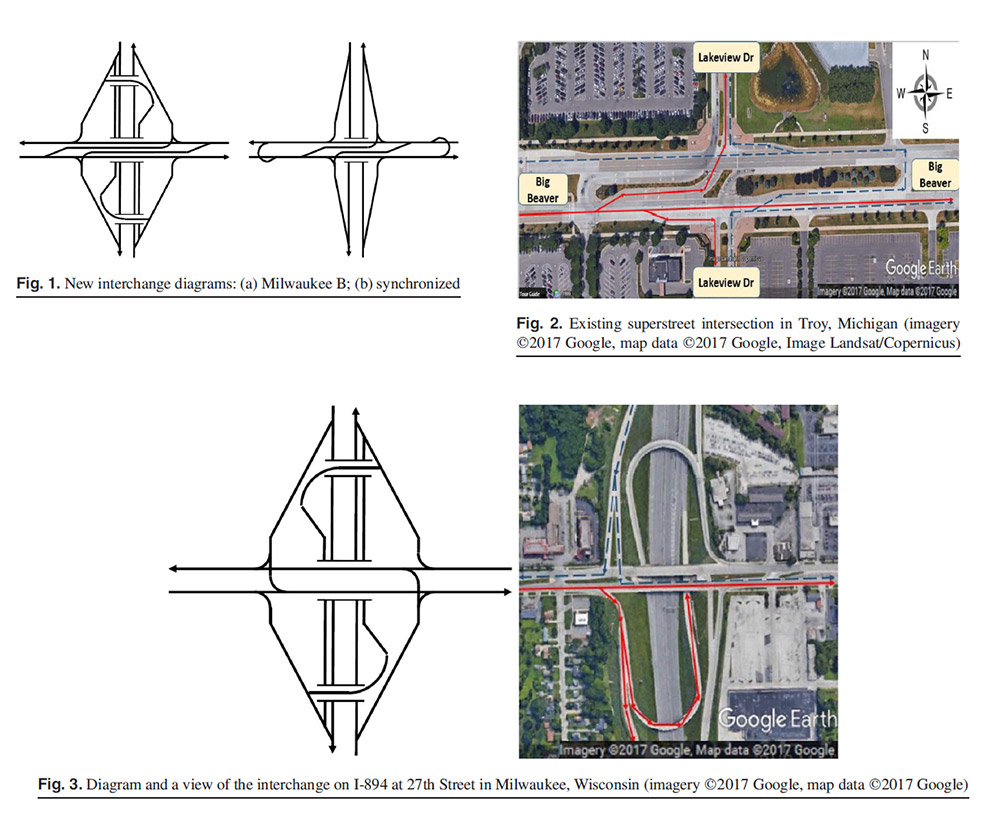 Superstreets and DDIs are not yet common in the U.S., but nearly 100 DDIs have spread to at least 29 states since 2009. However, Molan envisions a solution that addresses certain limitations of DDIs.

"While the DDI does well in efficiently moving large left-turn demands, it is not the best design for through traffic or pedestrians," said Molan.

Molan recently invented a new design called a super DDI (super diverging diamond interchange), which combines features of both superstreets and DDIs but results in lower traffic volumes at conflict points and removes the DDIs' free-flowing pedestrian crossings. The results were published in another paper by Molan and Hummer.

In simulation testing, the Super DDI reduced the number of conflicting interactions by up to 63% compared to a traditional DDI design. Pedestrians were also projected to experience a shorter waiting time at traffic signals.

"To date, Dr. Hummer and I have received much positive feedback from transportation professionals about the Super DDI," said Molan. "We hope that the design will save lives and prevent injuries one day soon."

Molan came to the U.S. from Tehran, Iran, in the fall of 2014 to pursue his doctorate from Wayne State. He left Detroit in 2017, but looks back fondly at his time in the city not only as a prime locale for transportation research, but also as a multicultural community, and considers Detroit to be a second home after Tehran.

"I am glad that I studied at Wayne State University with high-level faculty members like Professor Hummer, a leader in alternative design for intersections and interchanges who looks creatively and differently at his field," said Molan. "I learned a lot and had many great experiences."