Two leading organizations in edge computing - State of the Edge and Edge Computing World - announced 10 finalists for its inaugural Edge Woman of the Year award. Among the nominees was Tayebeh Bahreini, a computer science Ph.D. candidate in the Wayne State University College of Engineering.

The award was created to highlight the growing importance of the contributions and accomplishments of women in edge computing, a method that brings computation and data storage closer to the locations of devices and people producing and consuming information, lowering bandwidth and response times. 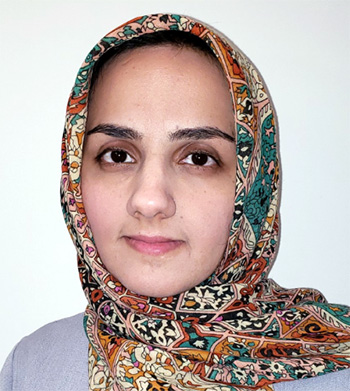 Bahreini and her fellow nominees were invited to attend the annual Edge Computing World event at the Computer History Museum from Dec. 9-12 in Silicon Valley.

Bahreini has made several important pioneering contributions in the area of resource management in edge computing systems, including the design of an efficient online iterative matching algorithm for placing multi-component services on edge servers. A paper on this research was published in the Proceedings of the Second ACM/IEEE Symposium on Edge Computing in 2017.

"Her design represents a big departure from the existing designs of service placement algorithms that mainly relied on complex techniques based on Markov models and imposed restrictions on the topology of the graphs characterizing both the applications and the physical resources," said Daniel Grosu, associate professor of computer science at Wayne State and Bahreini's Ph.D. advisor.

In addition to her design of the iterative matching placement algorithm, Tayebeh designed a novel envy-free auction mechanism for resource allocation in edge computing systems and an energy-aware resource manager for Vehicular Edge Computing systems.

Bahreini's proposed algorithms and mechanisms offer potential to enhance the capabilities of mobile devices and applications, and to reduce wasted energy and computational resources in organizations ranging from governments to private companies.

Results of Bahreini's research have been published in several international IEEE and ACM conferences and workshops, as well as top ranked journals such as IEEE Transactions on Parallel and Distributed Systems.

"She is very active in promoting the role of women in computer science," said Grosu.

Bahreini works in the Parallel and Distributed Computing Lab at Wayne State University directed by Grosu. She is the main developer on a major project in the lab focused on the design of a vehicular edge computing resource management system.