The 1970 Clean Air Race: A victory for Wayne State and a vision for the future 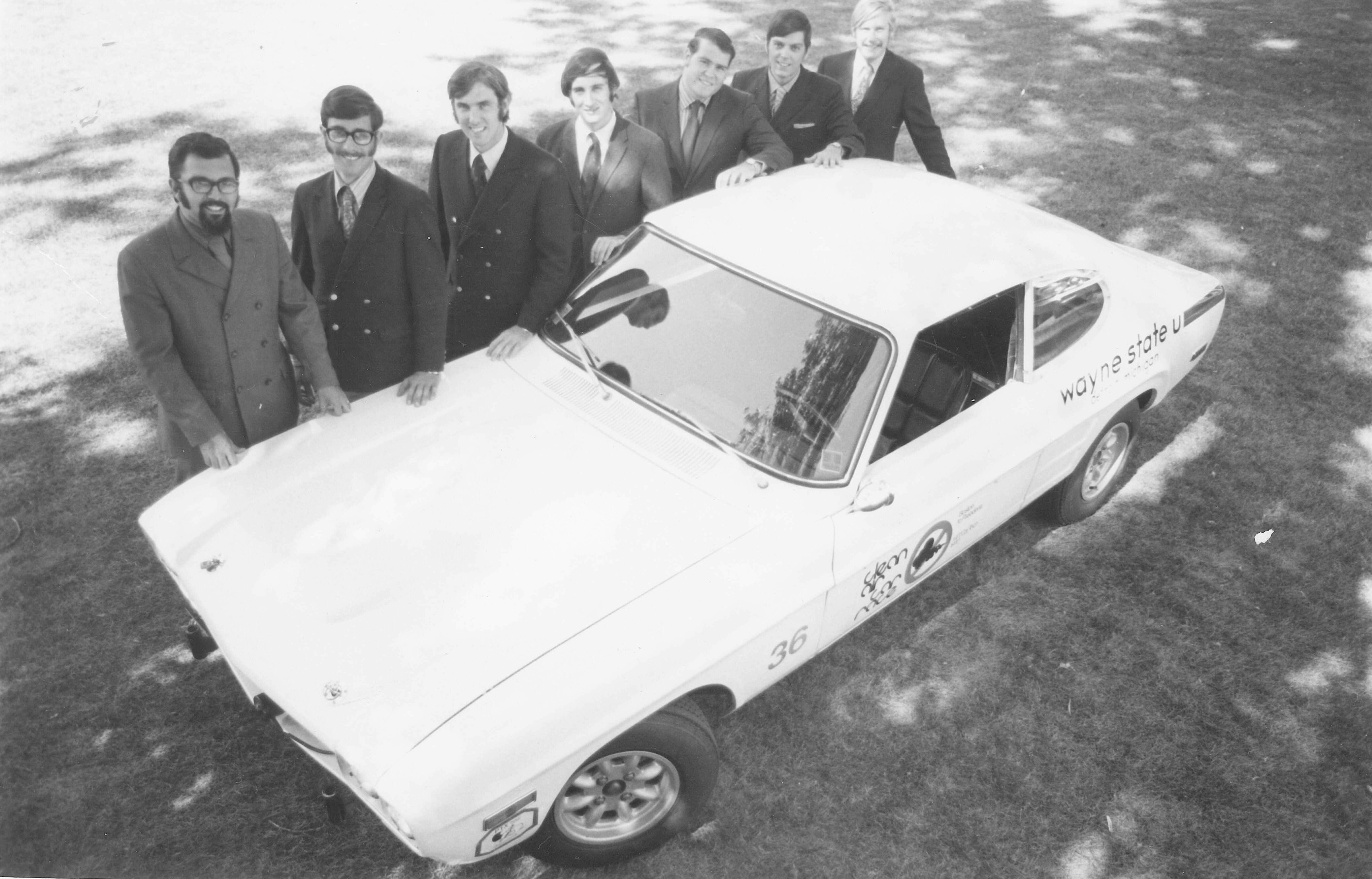 In 1970, Americans celebrated Earth Day for the first time, President Richard Nixon signed the Clean Air Act into law and the Environmental Protection Agency was established. These were critical steps in tempering the rapid increase in air pollution caused by a growing population that had become more reliant on automobiles for transportation.

New emissions standards and the prohibition of leaded gasoline resulted in today's passenger vehicles running 99% cleaner than their predecessors from 50 years ago, according to the EPA. However, another formative event in 1970 showed environmentalists and automakers alike that this success was possible - the Clean Air Race.

In August 1970, college students from across the country lined up in 43 vehicles at the Massachusetts Institute of Technology. The goal was to reach the California Institute of Technology - a 3,600-mile trip through 11 states plus Ontario, Canada - in a car designed to meet or exceed the forthcoming 1975 federal emission standards.

"I remember Dan taking the lead on getting us involved," recalled Geraghty, who at that time was a graduate student working as a carburetor engineer at Ford Motor Company, the team's major sponsor. "He had been aware of the 1968 Great Electric Car Race that went from MIT to Cal Tech, and, in 1970, MIT said they wanted to do another race."

The team met every Wednesday afternoon. Initially, they were going to use a four-cylinder, direct injection engine called the MUTT (military unit tactical truck) developed by the U.S. Army. That arrangement fell through, however, so the strategy pivoted to a Mustang V8 engine with Engelhard catalysts.

After an impressive testing session with the EPA in Ann Arbor, the team headed to Cambridge with a van, a pickup truck loaded with 150 gallons of unleaded gasoline and the clean-air car. On Aug. 24, Wayne State's Capri joined a vast array of vehicles - including electric, steam, propane and gas-powered cars - and the 1970 Clean Air Race began.

The Ford engineers - Geraghty, Jeryan, Riley and Wagle - took turns driving the clean car. The others were in the chase vehicle, joined by an MIT observer who ensured that the rules of the event were followed.

Teams drove for approximately 10 hours per day for six days, with stops in Toronto; Detroit; Champaign, Illinois; Oklahoma City; Odessa, Texas; and Tucson, Arizona. The vehicles, which were tested a few times along the way, had to maintain a minimum speed of 45 miles per hour, and entries were penalized if they completed fewer than 600 miles in a day.

Recalling driving through Texas, "I remember thinking to myself, 'holy smokes, we'll never cross this state, it's so big,'" said Karol, who was an undergraduate student at the time. Like his teammates, he also went on to a long career at Ford.

Long days notwithstanding, the Wayne State crew had another challenge driving across the country in the heat of summer.

"We had to be aerodynamic to get the best fuel economy, so we kept the windows closed and there was no air conditioning," said Geraghty. "It was toasty." 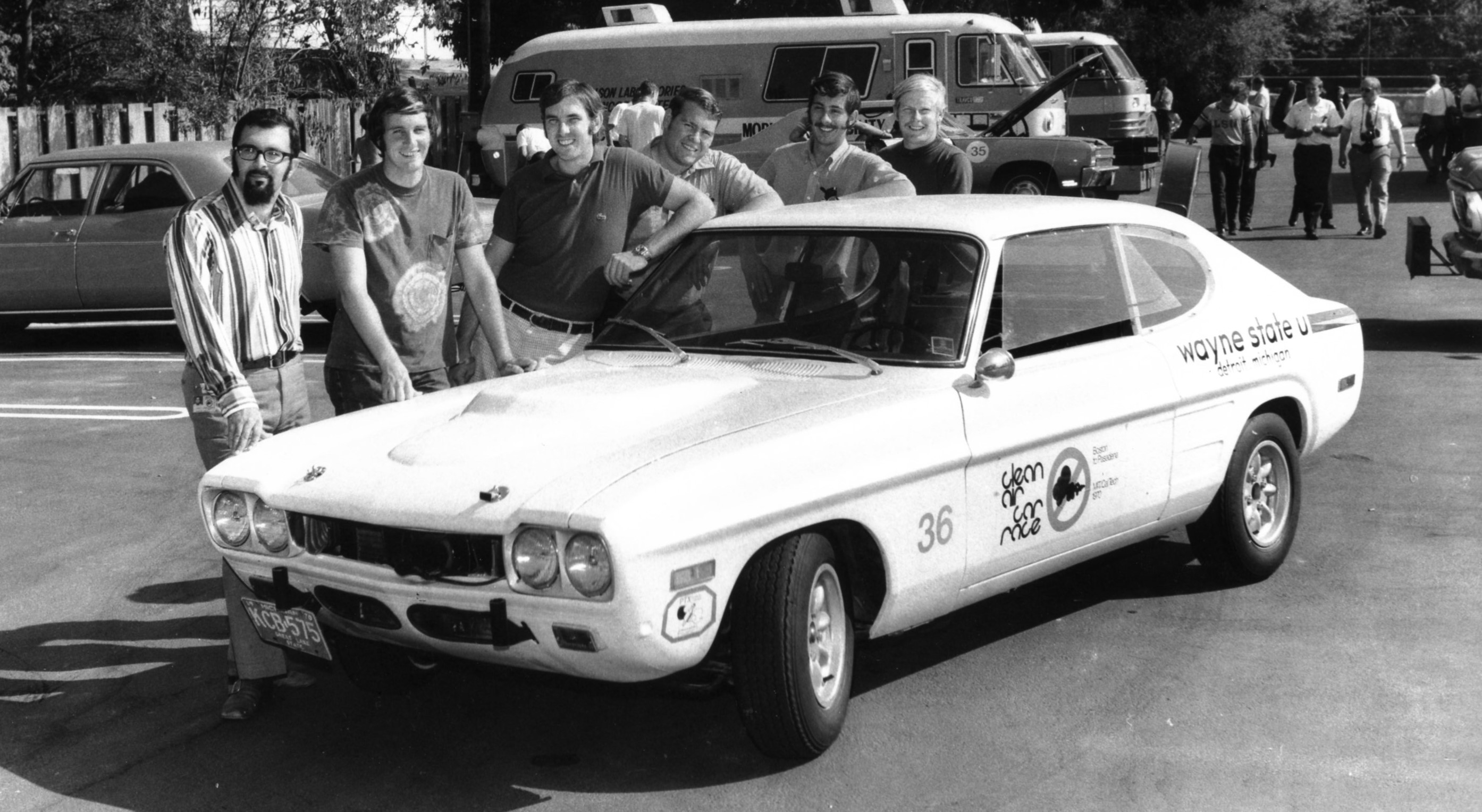 The Capri did not receive any penalty points on the journey and tested well for performance, fuel economy and emissions. One of only 15 vehicles to cross the finish line in Pasadena under its own power, the Wayne State car was declared the victor.

"One of the reasons we were chosen as the overall winner was because we had a reasonable and readily adaptable approach," said Geraghty, a 2004 inductee in the College of Engineering Hall of Fame.

The 1970 Clean Air Race received significant national attention. Communities hosted gatherings to celebrate the students and admire their vehicles. Media giants such as Life magazine and the New York Times covered the event, as the race proved to the country - and a skeptical auto industry - that the technology existed to meet the new federal standards and, indeed, clean the air.

Wayne State's team received significant praise upon returning home to Detroit, including personal letters of recognition from Ford, then Wayne State President William Keast, the Wayne State Board of Governors and the Engineering Society of Detroit. The race was the university's first win in a national engineering competition, and undoubtedly inspired many student teams that followed over the last half century.

"I'm proud to be representing Wayne State," said Riley. "The outcome was not necessarily expected, but that really made it extra special."