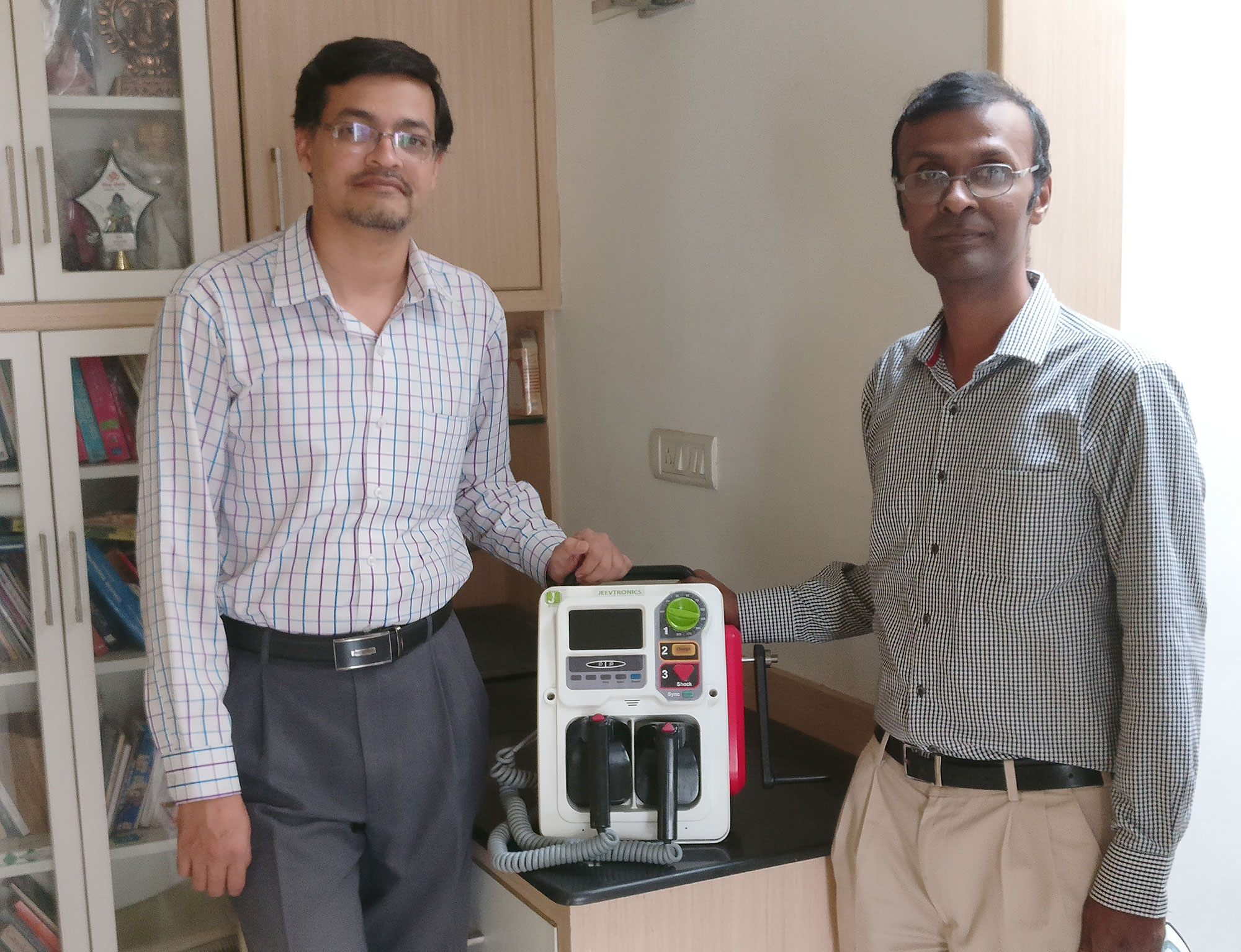 Cardiovascular disease (CVD) is a global dilemma. According to a 2016 report of the Global Burden of Disease (GBD) Institute for Health Metrics and Evaluation, over 17 million deaths worldwide can be attributed to CVD. While Detroit has some of the highest rates of CVD in the U.S. and sudden cardiac arrest is a leading cause of death across North America and Europe, the death rate in India is nearly four times higher than that of developed countries.

To tackle this issue, Wayne State University alumni Ashish Gawade and Aniruddha Atre co-founded Jeevtronics, a company that creates affordable medical devices for under-developed and rural areas. They have innovated a dual-powered defibrillator that works on electricity but can also be hand-cranked when electricity is not available, a common scenario in small villages and remote regions of India.

The device is designed to be portable as well as extremely durable. It can be used by anyone from first responders to everyday citizens. Most importantly, it has the potential to save countless lives.

A crash course in social entrepreneurship

Gawade and Atre are lifelong friends - they met in fifth grade and actually share the same birthday. They came from India to the United States together in 1999, working at Ford Motor Company by day and taking classes in the mechanical engineering graduate program at WSU in the evening.

"Wayne State was a natural choice," said Atre, who noted that he and Gawade were particularly drawn to the pioneering research of Professors King-Hay Yang and Albert King in finite element analysis as it related to vehicle crash safety.

They each earned a master's in 2001, but a desire to develop their business acumen led them to the M.B.A. program at the University of Michigan, where they met C.K. Prahalad, a renowned professor and author of The Fortune at the Bottom of the Pyramid. The book used case studies to demonstrate how companies were concurrently profitable and bring positive social changes to impoverished communities.

"We were inspired, and wanted to develop a product that would be useful in the bottom of the pyramid," said Gawade.

In 2006, about 400 million people in India did not have access to electricity. At the time, solar power was too expensive and wind energy had geographical limitations. So, they went another direction.

"We thought, 'Why don't we invent something that would better allow people to generate power on demand?'" said Gawade.

This idea materialized into a power-generating stationary bike. Gawade left Ford and returned to India to bring this idea to life, and Atre later joined him.

"It was a risk," said Atre. "But we really wanted to take this journey."

Navigating some bumps in the road as they developed industry connections and learned the ins and outs of social entrepreneurship, the product eventually reached 500 households. However, the company was unable to scale up as solar energy became more affordable and accessible.

"We figured if you can't beat them, join them," said Gawade, so he and Atre started making their own solar lamps and founded the appropriately-titled company Bottom of Pyramid Energy and Environmental Innovations. Using high-quality materials including circuits and lithium ion batteries, they gained a reputation as having the longest-lasting solar lamps in the world.

Exploring other social issues with ties to energy, Gawade and Atre later discovered the need for defibrillators in rural India, Africa, Asia and South America. With research funding from the Indo-U.S. Science and Technology Forum and the Government of India, they collaborated to develop a prototype, and Jeevtronics was born. 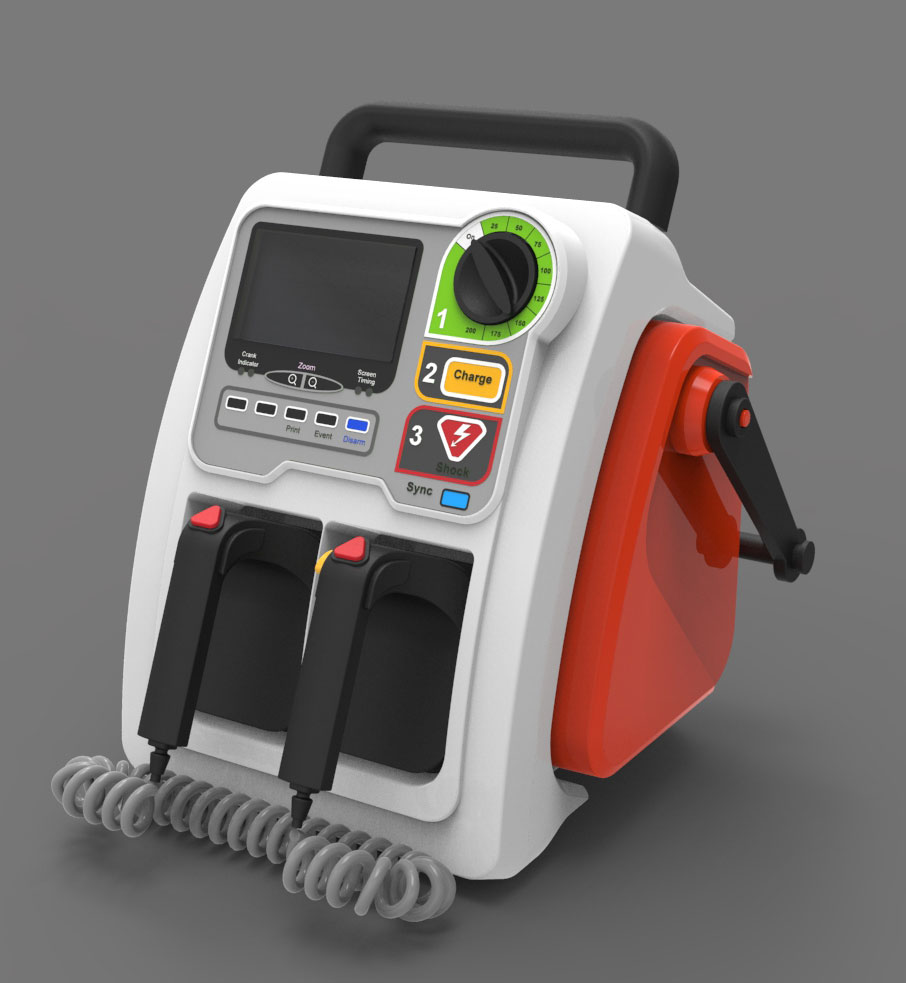 A sense of purpose

The business value of Jeevtronics can be measured using a "triple bottom line," which extends the focus on financial success to also include social and environmental responsibilities. The company's defibrillator, which has been in development over the last four years, fits this framework to a tee.

In India, external defibrillators can be cost-prohibitive. Hospitals may only have one per floor, serving 50 to 100 patients (compared to one per three ICU beds in the United Kingdom). The Jeevtronics device can be produced for a quarter of the cost of leading defibrillators.

The odds of survival of a patient in cardiac arrest decline by 7 to 10 percent per minute of delay in defibrillation. This device can be charged and ready to use in five to nine seconds.

According to the Food and Drug Administration, nearly one-quarter of all automatic external defibrillators (AED) failures occur because of battery power problems, a problem that is rendered moot with a device capable of being human-powered. This quality also makes its ecological footprint practically nonexistent, as does the sustainability of the device itself. Defibrillator charge/discharge cycle standards require a device to last 2,500 shocks. Though rigorous testing, already a hallmark of Gawade and Atre's business strategy, the Jeevtronics device has surpassed 16,000 shocks.

Jeevtronics is preparing to bring this defibrillator to the market in India, but Gawade and Atre are learning that a need exists for this technology in the U.S. and other countries. Its applications can range from EMT and ambulance units to athletics and recreation, and to rural and farming communities.

The company's prosperity and global impact will be a direct reflection of the passion of its founders, who have dedicated themselves to making the quality of life for those in the "bottom of the pyramid" a little better.

"The sense of purpose we have to be able to do something to help people, is the most fulfilling part," said Gawade.