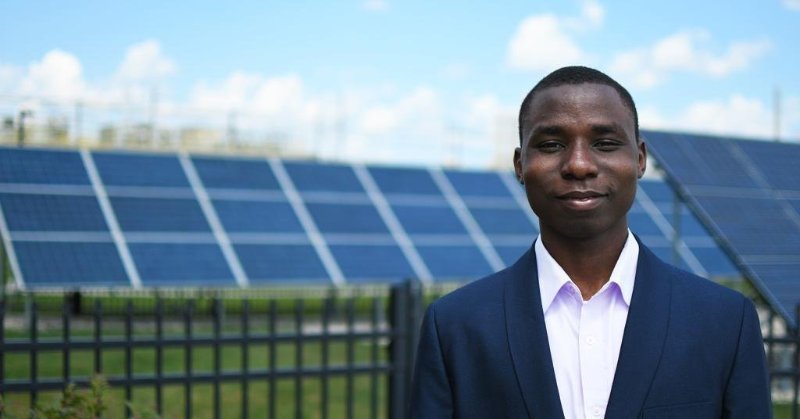 Nigeria struggles with an electricity grid that has collapsed more than 200 times in the last decade, often keeping many of the nation’s 211 million people in the dark. Perhaps it’s no surprise that Habeeb Ayantayo, a Nigerian who earned his B.S. in electrical engineering from Wayne State University in 2021 and is now a graduate student at Stanford University, has made improving the availability and efficiency of energy systems his life’s work.

Ayantayo, who was born in Detroit and moved to Nigeria as a young boy, returned to his city of origin in 2017. With the help of Pell Grants and other private scholarships, he pursued an educational pathway at Wayne State that stemmed from a few varied interests that he wanted to meld together.

“I enjoy working physically with components, but I didn’t want to pursue only hardware. I also didn’t want to go all the way into programming,” he said. “I found that electrical engineering offers a good balance.”

Ayantayo settled into his surroundings quickly. The multicultural atmosphere on campus was appealing, and he was able to find groups with shared interests such as the Muslim Student Association and IEEE.

“As a younger member of IEEE, being able to collaborate with and get advice from juniors and seniors was a great opportunity,” he said.

Fully immersed in his studies, Ayantayo earned exemplary grades in rigorous classes such as ECE 4330 (linear systems and signals), where he completed a PID-controller project.

“Habeeb is an amazing student with a great personality,” said Professor Mohamad Hassoun, who first met Ayantayo in 2019 when he earned the highest score among his classmates in intro to circuit analysis (ECE 3300). “He is highly motivated and I predict for him a highly successful future.”

Ayantayo also spent a year performing research alongside Ph.D. students in the lab of physics professor Zhixian Zhou, whose interests include nanoelectronics and two-dimensional semiconductors. Ayantayo approached Zhou after a session of his intro to physics course and expressed interest in learning more.

“If you’re going to spend your time doing something, you might as well try to be the best at it and provide as much value as you can,” said Ayantayo.

As graduation approached in 2021, Ayantayo pondered what was next. Earning a Wayne State education was a family affair — he has an older brother in the School of Medicine and three younger brothers in the College of Engineering — but the time had come to broaden his horizons further.

He applied to graduate programs at Stanford University, the University of Michigan and Cornell University. All three accepted him, but it was Stanford — which offered a full scholarship and a course assistant position — that proved to be the right choice.

Ayantayo’s first trip to California was the day he moved on Sept. 6, 2022, a few weeks before the start of the semester. But he was ready to hit the ground running and make his mark on the power industry.

“We have an abundance of energy, especially from sun and wind where it’s constantly regenerating itself,” he said. “Everyone should have access to energy.”