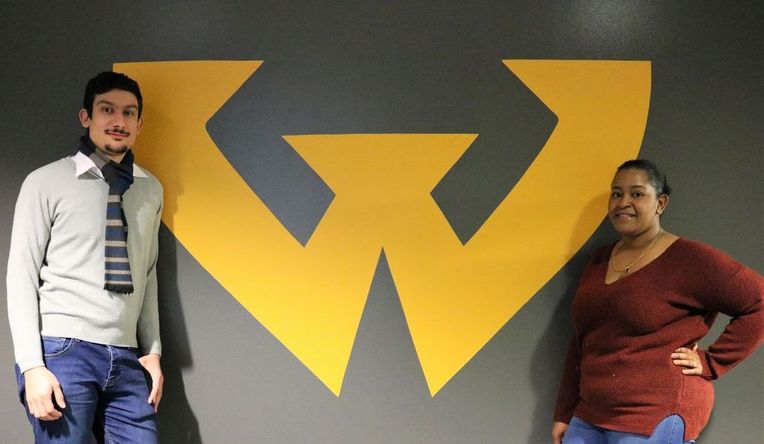 Last semester, Wayne State University welcomed two international Fulbright scholars to campus, Ilham Azali Assoumani and Idir Mahrouche, who will spend the next two years completing graduate programs in the College of Engineering. Although their areas of study are different, the two scholars share a common motivation: humanitarianism.

Azali is completing a master's at WSU in alternative energy technology. As an undergraduate student, she attended North China Electric Power University in Beijing, where learning both Mandarin and English was vital to her academic success. She graduated with a degree in electrical engineering in 2016, shortly after her home country of Comoros began facing a serious energy crisis.

"In 2016 I could say we had a big problem in terms of energy because 90 percent of the country did not have electricity," said Azali. "We had a new president coming in, and his main goal was to restore the energy back home, so he built a new power plant."

After completing a yearlong internship, Azali was hired to work in the new power plant. A few months later she was promoted to head of unit, and continued working there for two years. Inspired by her newfound interest in alternative energy and determined to help her country, she applied to become a Fulbright scholar.

"It was really interesting to see how much power we are delivering daily and how much we can save by using alternative energy in the future," said Azali. "Comoros is an island, and we have so many possibilities in terms of alternative energy, but we don't have engineers in that field."

Mahrouche attended the University of Boumerdes in Algeria, his home country, and received a master's in control engineering in 2017. He is now working towards a second master's in electrical engineering with a primary focus in robotics, and he is especially concerned with the application of robotics in the medical world. Robot-assisted, or computer-assisted, surgery is proving to have many advantages when utilized for minimal procedures. For Mahrouche, contributing to human progress is his greatest initiative.

According to Mahrouche, performing research is the best part of his studies, so deciding which university to attend revolved around research opportunities and lab facilities. The prospect of collaborating with the Detroit Medical Center was big factor in choosing Wayne State.

Both students are looking forward to the rest of their time at WSU. On top of her studies, Azali plans to join the Chinese club so that she can perfect the language, while Mahrouche is enjoying a smooth transition to Warrior life.

"I fit in. It's easy. Maybe because I've had other experiences of living abroad, but it's very diverse on campus," said Mahrouche. "There are people from all over the world."

Born into a family of world travelers, Azali is similarly accustomed to new experiences in unfamiliar places. All three of her brothers, one of whom was also a Fulbright scholar, pursued education abroad. Her mother was a traveling businesswoman.

"My mom went to Japan for six months in 1986. At that time, for a woman, it was kind of incredible. And she had just had a baby, my brother, three months before. In the mid-90s, she was one of the rare women in Africa to be president of a bank," said Azali. "So she showed me that you can have it all. You just have to have standards, know what you want and go for it."

For Azali, finding a solution to the Comoros energy crisis isn't the only positive impact she hopes to leave on her country. In the entire two years Azali spent working at the power plant back home, she was the only female employee.

"I was proud to be a woman engineer back home, working at the power plant," said Azali. "I want to show girls that it's not because you love makeup, or because you are this feminine woman, that you cannot do anything you want. I wish more African girls, engineering girls, Muslim girls, will have the opportunity to succeed in their field, doing what they love, in the future."

Faculty who want to learn more about Fulbright can contact Jaclyn Assarian at 313-577-9319 or jassarian@wayne.edu. For questions related to the Fulbright Student Program, contact Kelli Dixon, director of Study Abroad and Global Programs and the Office of International Students and Scholars, at ab6179@wayne.edu.

The Office of International Programs is always interested in hearing from faculty and student Fulbright alumni. If you have received a Fulbright award, we want to know about it! Email Carol Baldwin, communications coordinator for OIP, at carol.baldwin@wayne.edu and tell her about your experience.